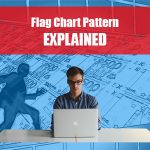 The Flag pattern is used as an entry point for the continuation of a prevailing trend. The Flag is a price pattern that moves from a shorter timeframe to counter the price trend in a longer timeframe. The pattern got its name “Flag,” as its structure looks similar to the Flag on a flagpole. What is the Flag chart pattern? The flag pattern identifies the possible continuation of a preceding trend from a previous point against the same direction. Generally, Flags are areas of tight consolidation in price action. It shows that a counter-trend move after a sharp price fluctuation. …READ MORE