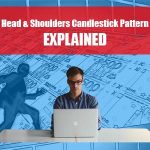 The Head and Shoulders Pattern is a trend reversal pattern consisting of three peaks. The two outside peaks are in the same height, while the middle one is the highest. The pattern identifies a bullish to a bearish trend reversal and emerges in an uptrend. What is the Head and Shoulders Candlestick Pattern? The formation of the pattern is based on a peak (shoulder), followed by a higher peak (head), and then another peak (shoulder). The two shoulders symbolize right and left shoulder. A neckline can be drawn by joining the lowest points of the two troughs (a stage which …READ MORE