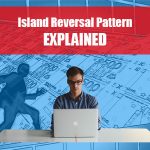 The Island pattern indicates a possible reversal of a current trend. The pattern appears with the gaps on either side, resembling a separated area. That’s why it was called the Island. What is the Island Reversal pattern? The Island pattern, because of its structure, can be identified easily on the chart. The pattern contains gaps on both sides. These gaps suggest that price continued in a trend for a while, but now it’s showing signs of reversal. Some traders say that the gaps which led to the formation of the Island pattern will eventually be filled as the price retraces …READ MORE